An Alaska small estate affidavit can be used to circumvent the probate process after a family member (the “decedent”) has passed away. The document can only be used if certain requirements are met, which include the net estate being worth less than fifty thousand dollars ($50,000 – not including vehicles) and thirty (30) days passing since the decedent’s death. Alaska law does not require the affidavit to be filed in a probate court.

In addition to the requirements stated above, the form can only be used if the decedent did not own real property at the time of their death, OR if the property they owned automatically passed onto another person (via a Transfer on Death Deed, for example). Real property includes land and/or properties attached to the land. The form can be used if the decedent died testate or intestate (without a Will).

In Alaska, the person that completes the form is known as the “successor”. A successor can be:

Mandatory waiting period: A minimum of thirty (30) days must pass after the death of the decedent before the form can be used.

Where to file: The state of Alaska does not require the form to be filed with the court. 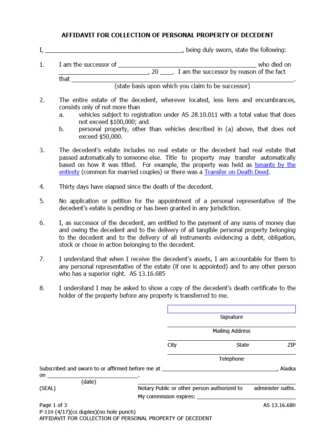