An Ohio minor (child) power of attorney form is used by a parent or guardian who requires another person (the “agent”) to act in their place during a period of separation from their child or children. This separation might be due to an illness, military deployment, working abroad, or destruction of the family’s home. During this period, the agent is the temporary caretaker of the child(ren) identified in the form and is granted the same general authorities as the parent or guardian. They’ll be able to consent to any health care matter, including surgery, medication, therapy, or hospitalization of the child(ren). An Ohio minor (child) power of attorney form remains effective until the parent or guardian’s written revocation or upon the stated termination date. 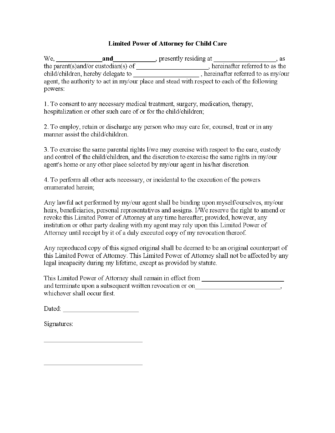