An Idaho minor (child) power of attorney allows parents/guardians to grant certain parental powers to a delegate for a temporary period. If the named delegate is a relative, the power of attorney can remain in effect for up to three (3) years. Conversely, if the delegate is not directly related to the minor, the document is only effective for a maximum of six (6) months unless the parent is on active military duty outside of the territorial United States, in which case, power of attorney can have an effective term of twelve (12) months if necessary. If only one (1) parent signs and the other parent disagrees or won’t cooperate regarding parental decisions, this document can still be executed. However, the signing parent can only delegate their own parental powers, and cannot, for example, delegate the other parent’s custody time. 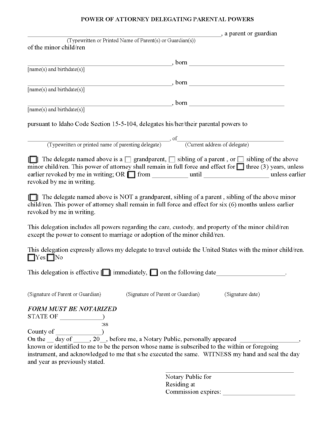