An interior design retainer agreement is a legal contract entered into by a client and a professional interior designer to guarantee services in exchange for compensation. The relationship between the parties is similar to any independent contractor arrangement except that the client compensates the designer in advance to reserve ongoing services.

The document describes what types of services will be performed by the designer as well as the amount of the retainer fee and the designer’s regular fee rate. The agreement becomes legally binding after the parties sign, and any breach can result in legal action.

How a Retainer Works

An interior design retainer secures the client’s right to use a designer’s services for a predetermined number of hours or until the completion of a project. The retainer is typically calculated using a percentage of the total estimated cost for the project. Paying the designer ahead of time ensures they are adequately compensated for the time spent preparing designs, and they won’t have to pay out of pocket for expenses and labor.

After the Retainer is Secured

Once both parties sign an interior design agreement, the designer will create their preliminary compositions and present these ideas to the client. If the designs are approved, the designer can take from the retainer until used up; after which the regular fee schedule relayed in the agreement will come into effect. If the retainer doesn’t cover the initial labor, then additional compensation will be required.

Designers will implement their regular fee schedule once the retainer has been depleted. This might be an hourly rate, a flat rate fee, or a combination of both (e.g., a flat rate for services with an hourly fee for project management). Alternatively, the parties may decide on additional retainer fees as compensation that pay for certain phases of the project.

When to Use a Retainer Agreement

Retainer agreements are used when a client needs a number of ongoing tasks and projects completed. The retainer arrangement will continue as long as both parties agree, and compensation is usually based on the designer’s normal fees (either a fixed or hourly rate). Retainers can also be used to fund one particular project, where the agreement is signed after the first consultation to fund the designer’s initial plans and research. They will then provide a detailed presentation to the client so they can choose whether or not to continue with the proposed designs.

What should the retainer fee be as a percentage of the total project cost?

Can a retainer agreement be terminated at any time?

Yes. An interior design retainer agreement contains a clause that gives both parties the right to end the relationship at any time if the terms of the agreement are violated. Appropriate notice must be provided to the other party, and the notice period must be agreed upon before the agreement is signed. 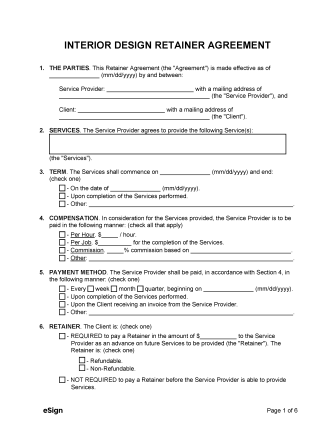 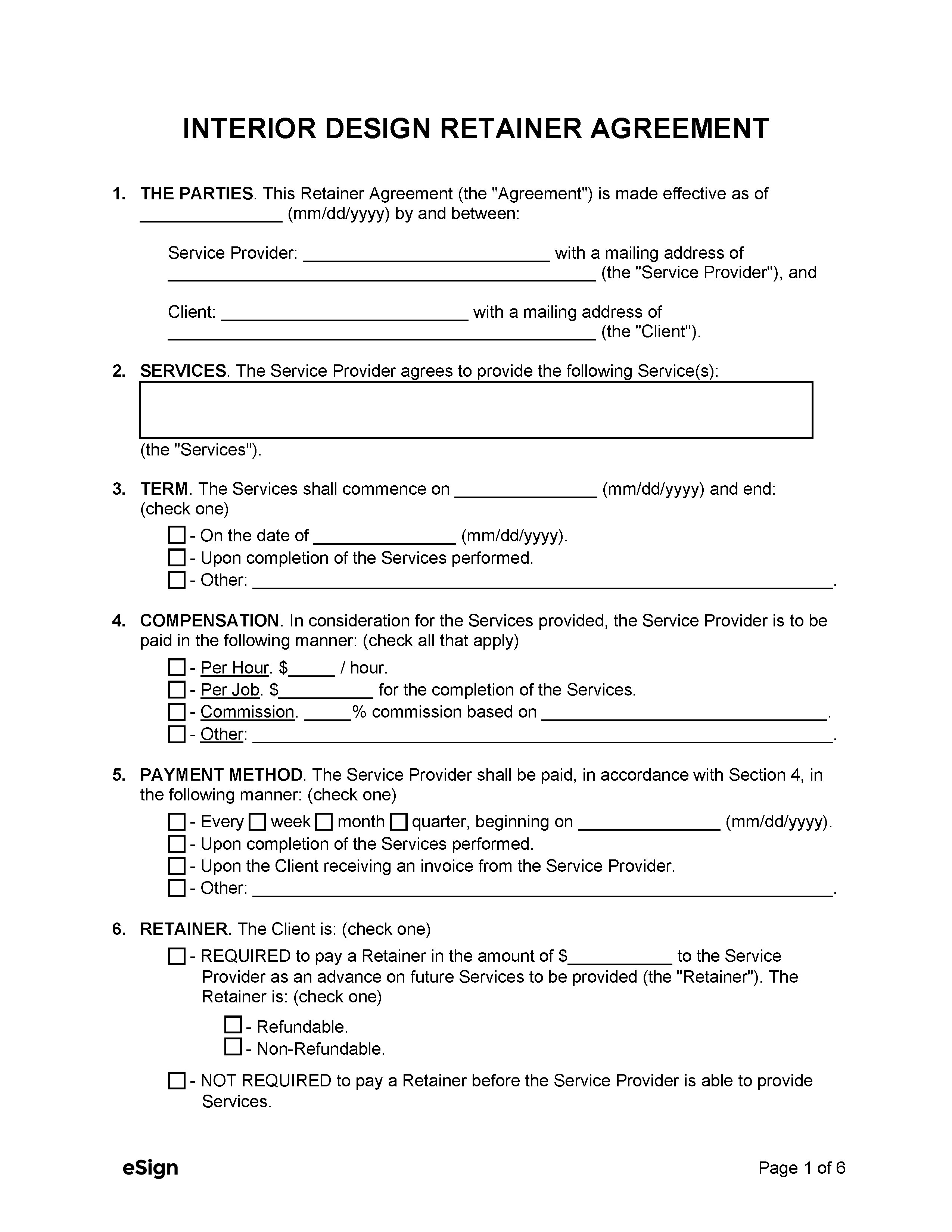