An independent contractor agreement establishes the terms of service between a contractor (freelancer) and the hiring client. The document covers a wide range of topics, the most important being the service(s) the contractor will provide, how they’ll be paid, and when or how the contract terminates.

What is an Independent Contractor?

An independent contractor (also known as a freelancer) is a self-employed professional that offers one or more services in exchange for payment. Unlike an employee, independent contractors are free from any company-established rules and regulations, including the manner in which they do their job. In other words, freelancers are only required to deliver the services they agreed to perform – but what they do (and how they do it) is solely up to them.

The freedom provided to contractors doesn’t come without consequence, however. Insurance, worker’s comp, paid vacation, sick leave, and a stable, consistent salary are a few of the benefits freelancers give up by being self-employed. Additionally, freelancers are responsible for deducting and paying their own taxes.

The IRS designates workers as either an employee or a contractor. As established above, contractors are responsible for reporting their own income (and filing taxes). In the eyes of the IRS, a person is considered self-employed if they meet the majority of the requirements written out in three (3) categories:

The IRS also provides a list of professions that are viewed as independent contractors by default. These professions include accountants, auctioneers, construction contractors/subcontractors, dentists, doctors, lawyers, public stenographers, and veterinarians.

It’s important to note that a person does not need to check every single box in order to be classified as a contractor. Because the lines may be blurry between the two types, the employer will need to choose the work classification that fits best.

If an employer can’t decide if a hired person is an employee or a contractor, they can complete and file IRS Form SS-8, (“Determination of Worker Status for Purposes of Federal Employment Taxes and Income Tax Withholding”).

There are two (2) major tax-related forms that are by freelancers and those that hire them. These forms are:

Form W9 is a form that is given to a contractor (from a business) before beginning work. The freelancer will then fill out the form and provide it to the hiring business for their records. Form W9 is not filed with the IRS but is used to provide the client with detailed information on the freelancer. This allows the client to confirm who the contractor is, and use the info provided in the form to later complete and file Form 1099-NEC (which is filed with the IRS).

Form 1099-NEC is a tax form used for informing the IRS of the amount that was to a freelancer during a single year. A single form is completed for each contractor that was hired.

Before 2020, businesses would need to report income via the IRS form 1099-MISC. The IRS now requires Form 1099-NEC to be completed going forward instead. The form is completed by the employer, who will then need to file a copy with the IRS as well as send a copy to the contractor for their own tax reporting.

It needs to be completed if a contractor was paid $600 or more during the course of a year.

What is an Independent Contractor Agreement?

An independent contractor agreement is a form that spells out the working relationship between a freelancer and the company hiring them. It covers all the details of how the two will work together, including the services that will be performed, how payment will be made, when the agreement will end, and more. The agreement is a necessity anytime a company is hiring a non-employee, regardless of how long the term of the contract is.

What Should be Included in the Form?

The goal of the contract is to:

To accomplish this, the agreement should include the following clauses:

Establishes the names and addresses of the contractor and the hiring entity (client). The client’s full entity name should be written (not the name of the person completing the form). Additionally, the address written should be the company’s principal office address – not the location where work will be performed (unless both are the same).

Establishing how the contractor will be paid (and when) is essential to forming a complete agreement. While the exact contents of the section do not matter, it should convey:

The agreement needs to specify the situation(s) in which termination will occur. While the majority of contracts terminate upon the successful completion of all service(s), the client may want to include a termination date to ensure they have the means of ending the contract should the contractor take longer than expected.

This section details what (if any) expenses will be paid for by an employer. Expenses refer to costs that were incurred as a result of the service(s) performed by a contractor. For example, if a contractor was hired to purchase and install a complex (and costly) generator, the contractor would most likely require reimbursement from the business for the full cost of the equipment.

Regardless of what is written in the contract, all contractors should hold insurance to protect themselves, their employees, and the property they’re working on should an incident occur. The agreement should include a clause referencing the contractor’s commitment to hold insurance prior to beginning work. Where agreements can differ is if there is a required minimum amount the contractor must hold (such as a $1,000,000 single limit), or if they can have any limit so long it complies with the laws of the state where work is occurring.

The contract should include a clause that confirms the hired contractor (and any of their employees) are deemed independent contractors per the IRS. While this doesn’t provide clients with an “out” if they’re trying to unlawfully classify an employee as a contractor, it provides the client with the contractor’s confirmation that they’re performing their services on a contracted basis and that they understand where they stand with the client.

In addition to the above-named clauses, the contract should contain the types of stipulations that are standard in contract law. These include:

Who writes the agreement?

Because the freelancer is in control of how they perform their services, it is customary for them to complete the form and present the terms to the client. If the client approves of the terms, both parties will sign and retain a copy. To save time, many contractors use the form as a template. They can do this by filling in information that remains unchanged from client to client (such as their address, name, provided services, and so on) while leaving fields that will require unique information blank. Then, the freelancer can make a copy of the template whenever they need to enter into a new service contract.

How do I end an independent contractor agreement?

First, check the agreement. The majority of contracts will include a provision that stipulates when and how the parties can be released. It’s important the clause is followed closely to ensure neither is in breach of contract (which can result in a legal mess). Additionally, if the contract allows either party to end the working arrangement, it will most likely include a clause that specifies the number of days’ notice that must be provided to the other party. If there was no written contract and termination was never discussed orally, the best course of action is for both parties to get together and come to an agreeable conclusion.

Are non-compete agreements enforceable for freelancers?

While it varies on a case-by-case basis, many non-compete agreements are not enforceable. There are two (2) main reasons for this: 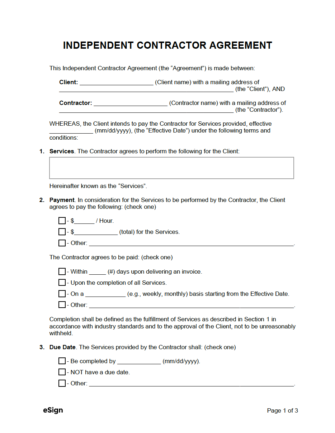 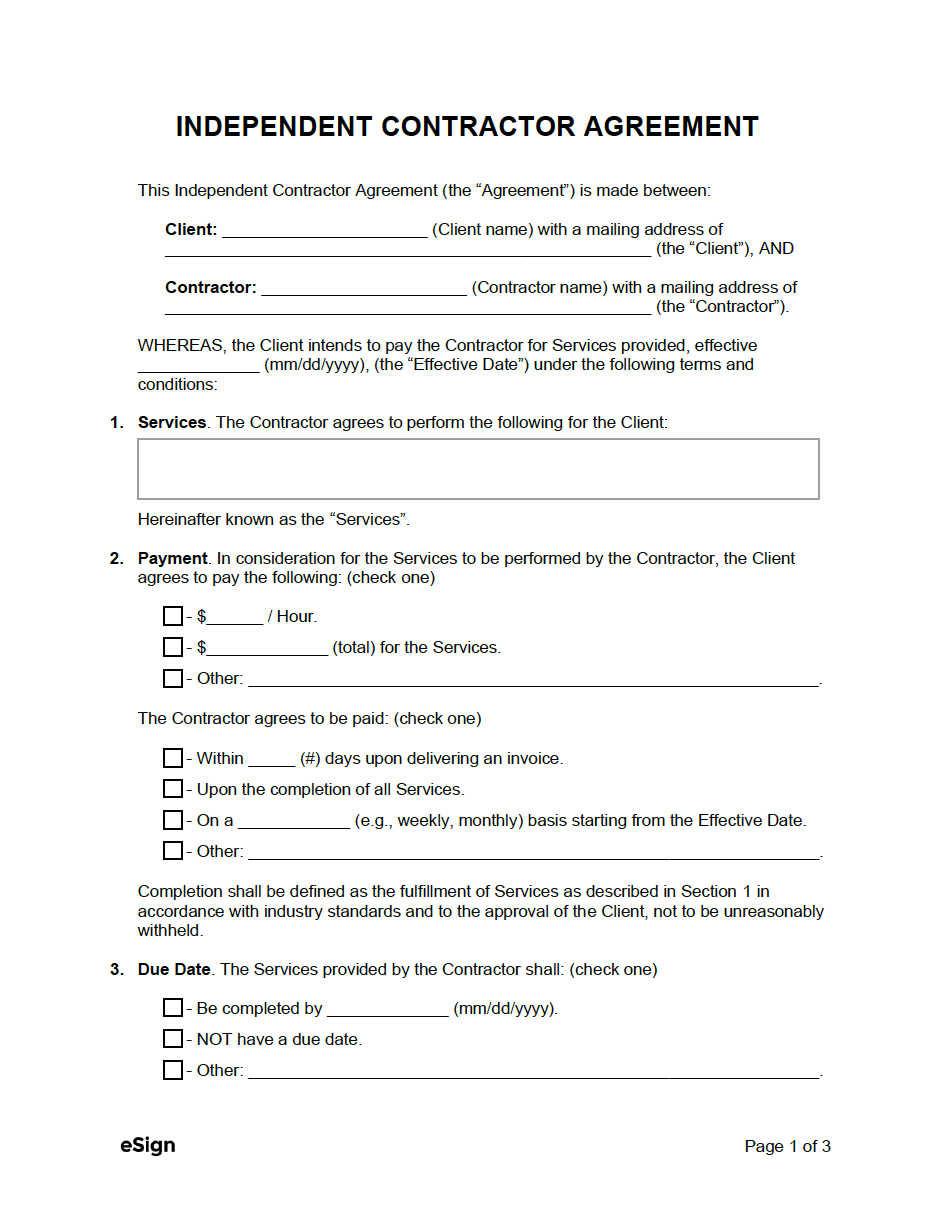 Visit our homepage to edit, fill, collect signatures, or sign yourself - 100% free!