A Florida non-compete agreement, or “NCA,” is used to prohibit an individual from competing in the same field as their employer after they’ve left the company. The document allows business owners to prevent employees who receive specialized training or access to trade secrets from gaining a competitive advantage post-termination. An NCA’s enforceability depends largely on whether the restrictions protect a valid business interest without adversely affecting the employee.

Non-compete agreements are enforceable if they protect a “legitimate business interest.” Examples of such interests include, but are not limited to:

As stated above, a non-compete agreement is enforceable if it protects a legitimate business interest. Furthermore, when enforcing an NCA, the courts will:

It should be noted that a court will only enforce non-competes that are in writing and signed by the employee.[1]

Florida statutes establish several time ranges that a court will “presume to be reasonable” depending on the circumstances of the case.

The following durations apply to agreements not being used for safeguarding trade secrets:

The courts will consider five (5) years or less to be reasonable and ten (10) years or more to be unreasonable if the agreement is for the protection of trade secrets.[1]

However, the court may take into account other factors when determining the reasonableness of a time restriction and may uphold a longer period than specified by the statutes if deemed necessary.[7]

The geographic scope of a non-compete agreement is not governed by state law, and the courts will generally limit a geographic restriction to where the employer operates their business.[8][9]

The courts may uphold non-competes with broad geographic scopes for employers in highly specialized industries. In one incident, the court allowed for a non-compete agreement encompassing the entire country for a company that provided specialized insurance to a niche customer base.[10]

Florida Non-Disclosure Agreement – Used to ensure that a recipient of sensitive information does not breach the owner’s confidentiality.

Florida Non-Solicitation Agreement – A contract that prevents a former employee or business owner from poaching clients and members of staff.

Is blue penciling allowed in Florida?

Yes. Florida statutes state that courts must narrow down an excessive restriction if the rest of the agreement is valid.[1] In general, the courts have broad powers in blue-penciling and may impose a new restriction as they see fit.[4] 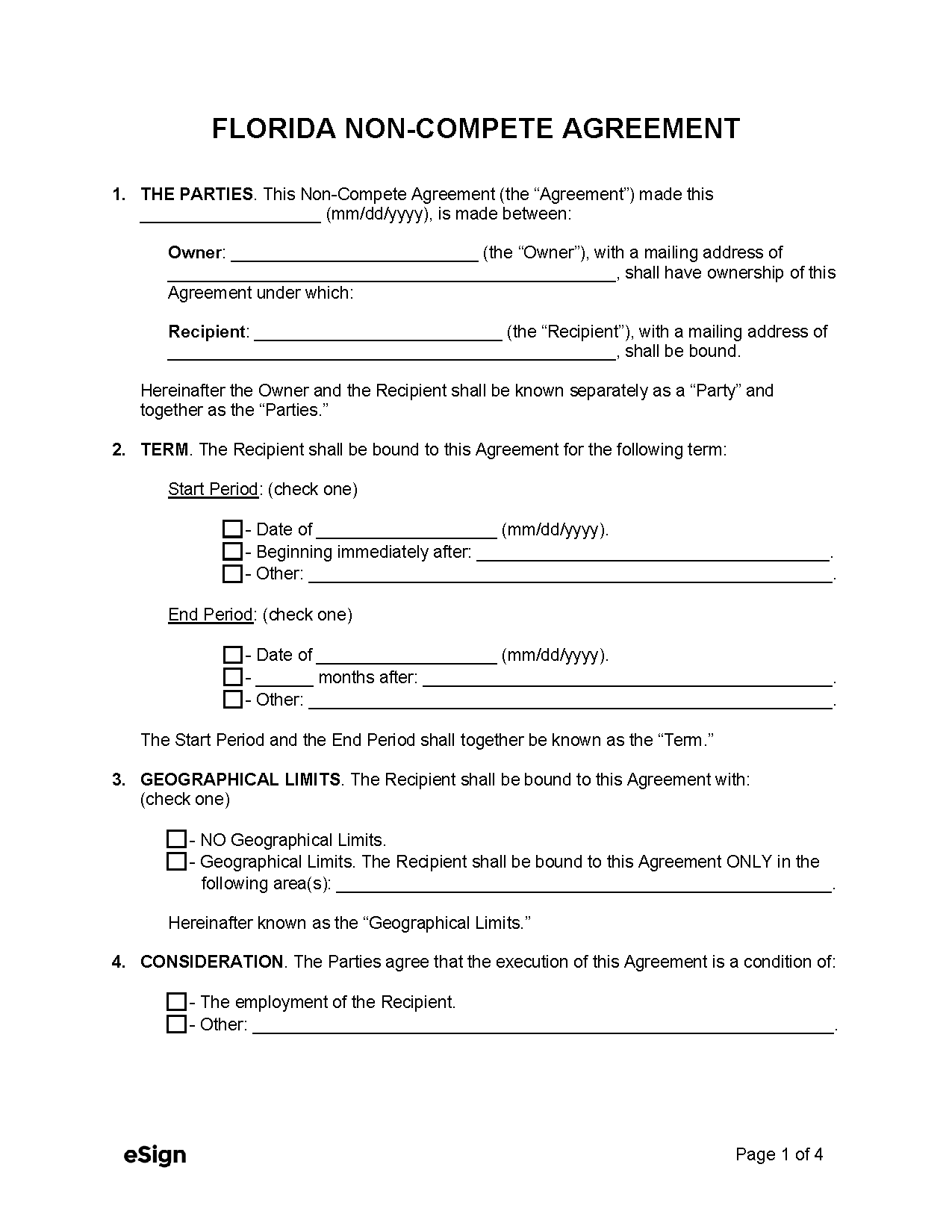