A Georgia non-compete agreement allows one party, a business owner, to temporarily prohibit the other party from competing in the same region and industry. Employers often use the agreement to ensure an employee does not use any of the job training, confidential information, or customer data they are provided to compete after the business relationship terminates. The agreement must be limited to reasonably protecting a business interest and cannot be used to enforce excessive restrictions that go against the public’s welfare.

In addition to prohibiting competition, non-compete agreements often contain non-disclosure and non-solicitation covenants as well. These covenants allow employers to protect their trade secrets and prevent ex-employees from contacting their customers, clients, and employees.

Non-compete clauses are enforceable, though there are a number of requirements that must be satisfied. The agreement must contain reasonable time, area, and activity restrictions and can only be used to protect a legitimate business interest.[1] Furthermore, the courts will determine enforceability using the following policy:

“The court must balance the interest the employer seeks to protect against the impact the covenant will have on the employee, factoring in the effect of the covenant on the public’s interest in promoting competition and the freedom of individuals to contract.“[2]

Employees bound by a non-compete agreement signed on or after May 11, 2011, must meet one of the qualifications listed in Ga. Code § 13-8-53(a) for the agreement to be enforceable.[3]

Depending on the party being restricted, Georgia state statutes set different time periods that the courts may presume reasonable.

The courts will also presume a non-compete with a time restriction equivalent to the duration of the parties working relationship as valid, so long that the restriction is in accordance with the above periods.[9]

Georgia statutes state that a geographic scope covering the areas where the employer operated (including areas unknown at the time of the agreement’s execution) is valid so long that the restriction is reasonable. Otherwise, the party preparing the agreement may also include a list of competing employers for which the restricted party may not work for the duration of the non-compete.[9]

Georgia Non-Disclosure Agreement – Protects confidential information relayed between two (2) parties from being disclosed to others.

Georgia Non-Solicitation Agreement – Ensures that a company’s employees and customers will not be poached by former staff.

Is blue penciling allowed in Georgia?

Yes. Georgia courts may blue-pencil an invalid covenant so long as the revised agreement is less restrictive than the original.[3] 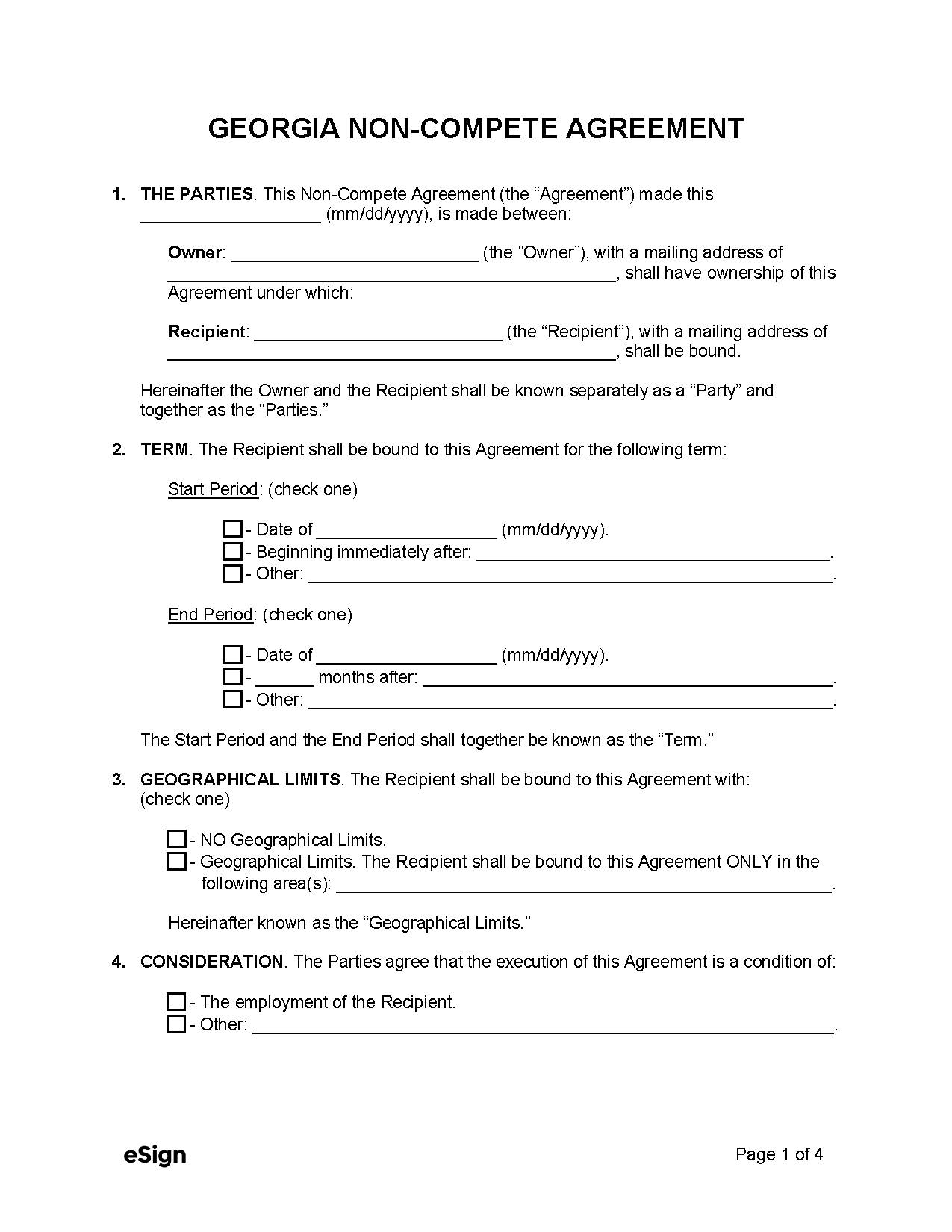