A New Jersey non-compete agreement is a legal contract that requires the signing party to refrain from competing with a business owner within a certain area and time frame. The executed contract contains the necessary language to ensure that an employee who was given access to the employer’s customer information, trade secrets, or confidential information cannot start or work for a competing company post-termination. The completed document establishes the agreement’s duration, geographic scope, and prohibited activities, which must only be so restrictive as to protect the owner’s business interests.

Non-compete agreements are enforceable in New Jersey and are governed by common law, as opposed to state statutes. The courts uphold non-competes if they are reasonable and satisfy what is called the “Solari/Whitmyer test;” which states the employer must demonstrate the following:

“• Confidential business information, including patient lists;
• Patients and patient referral bases; and
• Investment in the training of a physician.”[4]

The courts determine the reasonableness of a non-compete’s duration on a case-by-case basis.[7] Restriction periods ranging from one (1) to five (5) years have been allowed.[8][9][10]

In a case of a non-compete with an undefined time period made between the seller and buyer of a business, a New Jersey court ruled that it is acceptable for an agreement to be unlimited in duration provided its geographic scope is reasonable.[11]

Similarly to an agreement’s duration, a court will decide if the geographic restriction will be enforced depending on its reasonableness and the facts of the case.[7] Courts generally enforce an agreement if the employer has a legitimate interest in the proposed restricted area.[4][9][12]

In one ruling, a court upheld a non-compete without a defined geographic area as the employer’s line of business involved making phone calls across the country.[13]

Courts compare the consideration provided to the protected interest.[3] For example, one court found that an employer who offered high-performing employees a stock options award in exchange for signing a non-compete was justified.[14]

In other cases, New Jersey courts have accepted the following forms of consideration:

New Jersey Non-Disclosure Agreement – Used to place a restriction on a party’s ability to share trade secrets or other sensitive information.

New Jersey Non-Solicitation Agreement – Disallows an employee or entity from conducting business with the customers of the business in whose benefit the agreement is made.

Yes. Agreements with overreaching restrictive covenants can be revised to be more reasonable if the circumstances allow.[2]

In certain cases, federal courts applying New Jersey law have opted not to blue pencil where a narrower restriction would not render the agreement necessary to protect a legitimate interest.[12] 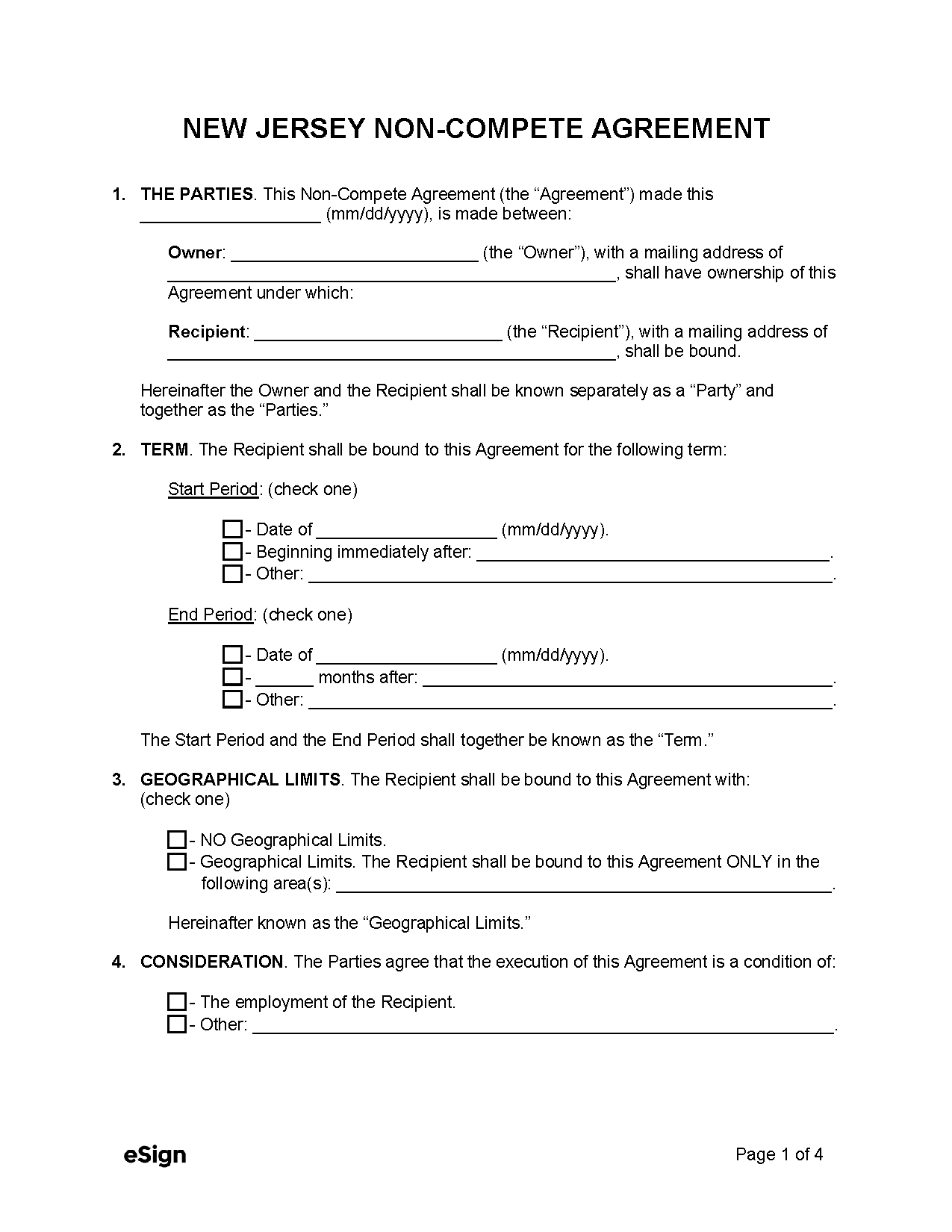