A New Mexico non-compete agreement is an agreement wherein one signing party is prevented from competing with the other’s business for a specified period. The document prevents those who were given access to trade secrets and specialized training (e.g., employees, contractors, previous owners) from using it to gain a professional advantage and adversely affect the employer’s protectable interests. The activities typically restricted by a non-compete include starting a similar company, working for a competitor, or soliciting the employer’s customers or clients.

In addition to restricting competition, the agreement contains non-disclosure provisions that require the signing party to ensure their employer’s proprietary information remains confidential for the contract term.

Non-compete agreements are enforceable agreements under New Mexico common law. There are no statutes governing non-competes generally, and they have only been addressed in a few cases. That said, New Mexico courts have established certain conditions that the agreement must comply with before it may be enforced:

State statutes do not provide any maximum period for non-compete agreements. Courts enforce time limits that they deem reasonable and sufficient for protecting the employer’s business interests and have allowed non-compete durations of two (2) to three (3) years.[2][3]

In one case involving the sale of a business, a fifteen (15) year restriction was found reasonable due to the significant sale cost and because the business’ goodwill was at risk.[8]

New Mexico courts consider geographical scopes no greater than the area where the employer has a protectable interest to be enforceable.[1] Restrictions encompassing a city or county have been allowed by the courts.[2]

In one decision, the Supreme Court of New Mexico ruled that the restricted party could not compete in Las Vegas and other areas where they had performed work under contract, stating that the scope was no wider than required to protect the employer.[1]

New Mexico statutes and common law do not provide well-defined guidelines for consideration.[1] In the case of a non-compete between a physician and a clinic, travel expenses, vacation time, and the right to end employment with thirty (30) days’ notice was sufficient consideration.[9]

New Mexico Non-Solicitation Agreement – Prohibits the signatory from soliciting customers and employees of the owner’s business.

No. Contracts entered into freely by the parties involved will generally not be revised by New Mexico courts.[10]

However, the New Mexico Court of Appeals upheld another court’s ruling to reduce the geographic radius of a restriction as the agreement included a provision allowing for modifying the terms.[11] 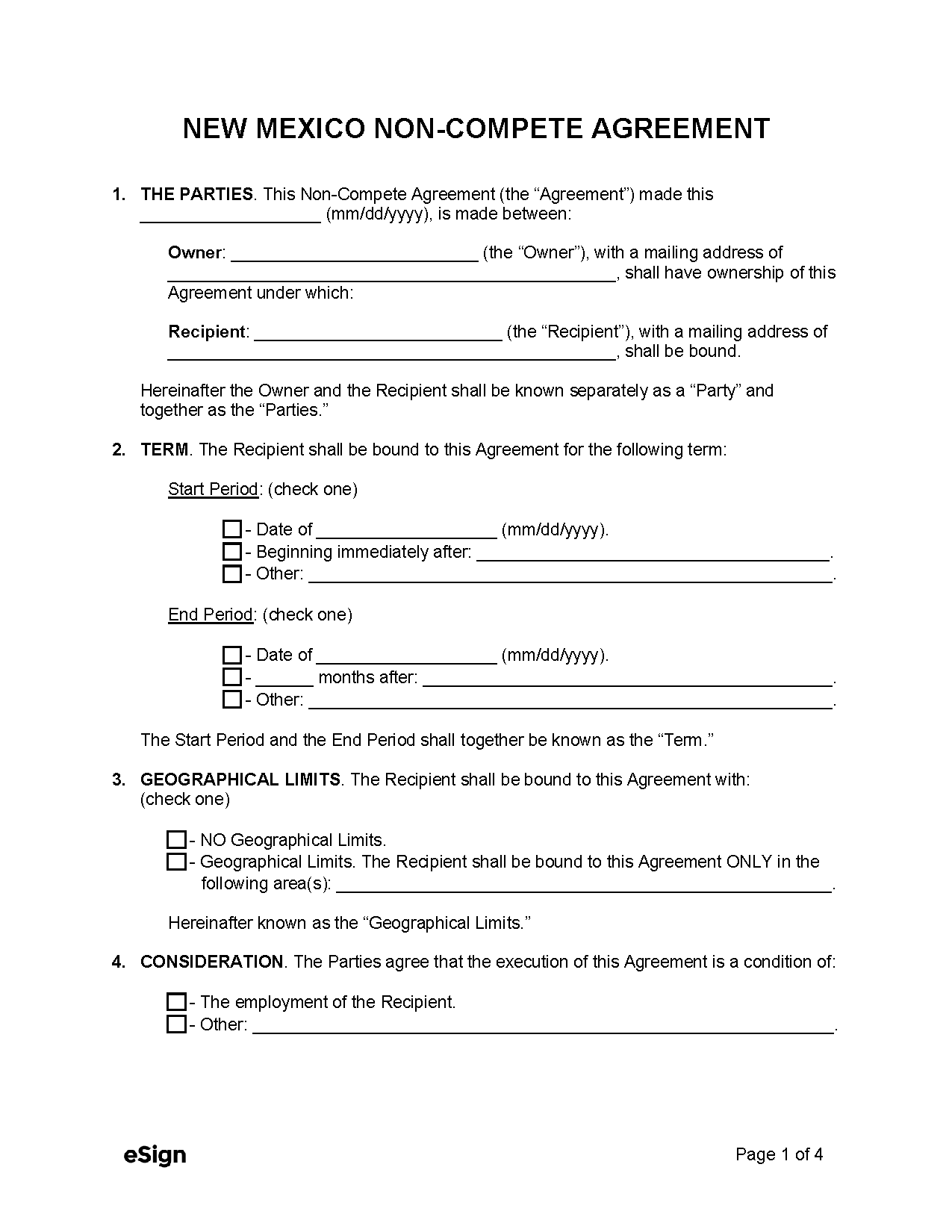