A West Virginia non-compete agreement is a contract that temporarily prohibits an employee from engaging in activity that competes with their employer’s business. Companies often draft these contracts during the hiring process as a security measure, assuring that the new employee won’t start or join a competing enterprise after leaving their job. Outside of employer-employee relationships, non-competes can be used to prevent the seller of a business from re-engaging in similar activity following the transfer of company ownership.

Among other requirements, the non-compete restrictions (a.k.a., “covenants not to compete”) are only valid and enforceable if they are reasonable and necessary to protect the employer’s business.

West Virginia law recognizes non-compete agreements as legally enforceable contracts. When determining whether to uphold non-compete provisions, the courts will weigh a number of considerations. Generally speaking, the employer’s restrictions would be deemed enforceable in a legal proceeding if all of the following apply:[1]

The restrictive time period cannot be unreasonable or restrain the employee further than what is required to fairly protect the business interests of the employer. When evaluating the contract’s reasonableness, the courts often analyze the duration and geographical restrictions together. In one particular lawsuit, a three (3) year restriction was imposed on an employee who started a business similar to that of their former employer.[6] In another case, an unlimited duration was enforced upon a business seller to prevent competition against the purchaser.[3]

As with all other restrictive provisions, the geographical non-compete area must be reasonably limited to protect the employer’s business interests only. The reasonableness of a geographical limitation is often evaluated simultaneously with the contract’s duration. A 10-mile radius around a motel was deemed reasonable to prevent competition from the company’s former owner.[2] In another lawsuit, the courts found a geographical restriction of 250 miles excessive, as there was no evidence demonstrating that the restriction protected a legitimate business interest.[9]

West Virginia Non-Solicitation Agreement – Employees who sign this document agree not to attempt to recruit their employer’s clients or fellow employees.

Yes. West Virginia courts can blue pencil an otherwise unenforceable provision to the extent that the restriction becomes enforceable, so long as the non-compete agreement was executed in good faith and is reasonable on its face.[1] However, blue pencil modifications cannot be made to contracts that do not specify a geographical limitation.[11] 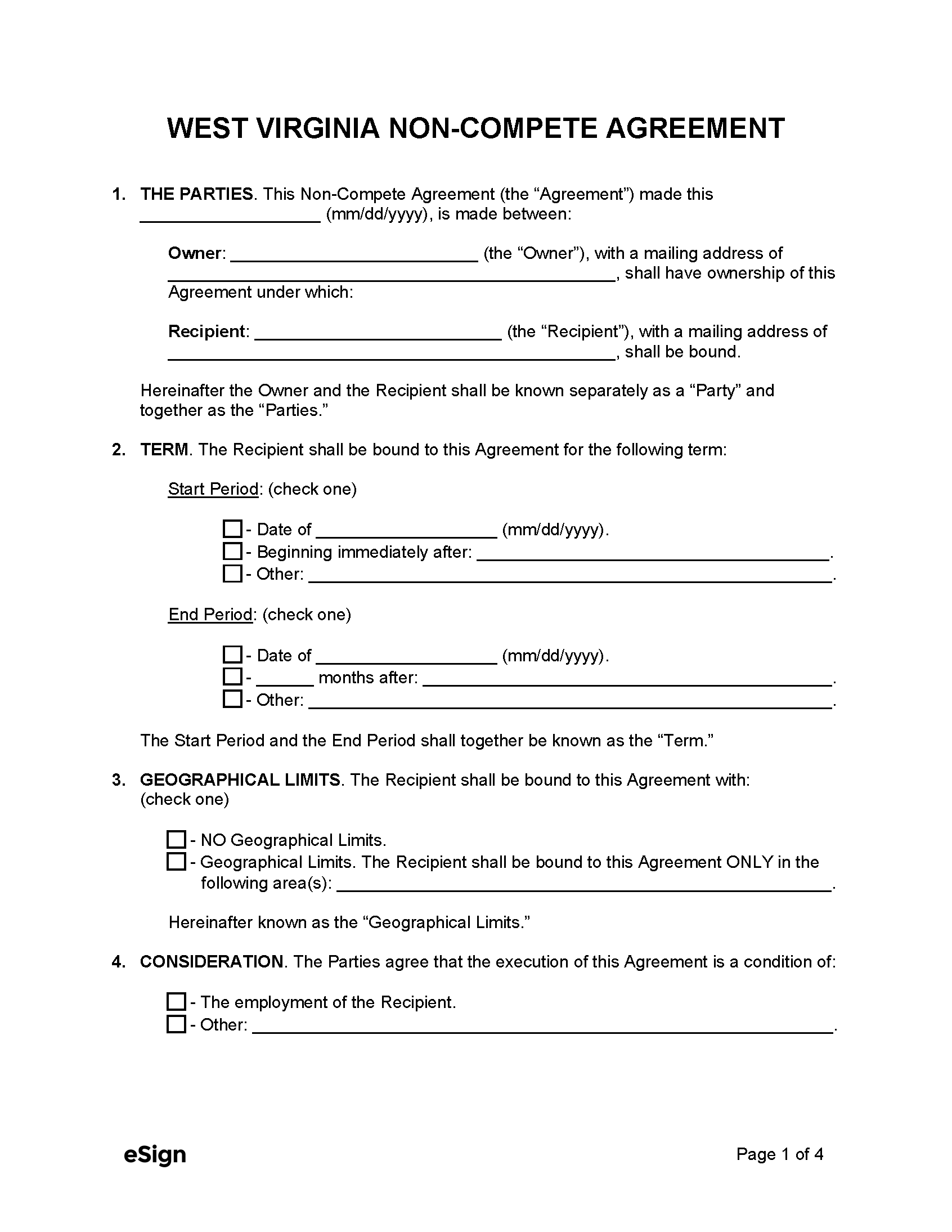