A Massachusetts non-compete agreement governs the terms of an arrangement whereby an employee promises not to go into direct or indirect competition with their employer once their position has been terminated. A typical contract will prohibit the employee from starting a new venture or working for a competitor in a similar industry as the employer within certain areas for a specific amount of time.

State law restricts the scope of NCAs to a maximum of twelve (12) months only within and around locations where the employee provided services for the employer. In exchange for these assurances, the employer must provide ample consideration, which may be an offer of employment or, if the employee already has the job, a material change in their employment.

While Massachusetts courts of law generally disapprove of non-compete agreements, the state has adopted the Massachusetts Noncompetition Agreement Act (MNAA) that asserts NCAs are enforceable as long as they are reasonable. The act outlines a number of requirements and stipulations to which courts can refer to ensure the agreement between employer and employee is equitable.

Massachusetts is the first state to require NCAs to have a garden leave clause. This provision states that the employee will receive at least 50% of their highest base annual salary of the past two (2) years during the non-compete period. If the employee breaches the restrictions put in place by the agreement, the employer may discontinue the payments.[2]

In accordance with state law, the following workers may not enter into a non-compete agreement:[3]

It is not permitted to ask someone in one (1) of the following industries to sign an NCA:

When drafting a non-compete agreement, employers are prohibited from setting a non-compete term that exceeds twelve (12) months. While courts used to enforce restrictive covenants longer than one (1) year, the only time an NCA term can be longer is if the employee misappropriated company property or breached their fiduciary duty. In this case, the non-compete period may be extended another year, but no more than two (2) years total from the date of termination of employment.[9]

In accordance with state law, non-competes should only be enforced if the geographical scope is not too broad and does not go beyond the areas where the employee provided services.[10] However, sometimes the coverage of the employer is quite far-reaching, and courts have deemed national or global geographical restrictions to be reasonable if the employer built a broad market influence.[11]

If an individual is offered a job and presented with a non-compete at the same time, the offer of employment is deemed to be sufficient consideration in the eyes of Massachusetts courts. When a non-compete agreement is provided to an employee who has already commenced their job, consideration aside from continuation of work must be furnished by the employer.[12] State statutes do not define what constitutes appropriate consideration in this case but, in prior cases, a change in title, pay structure, level of authority, or focus of work were acceptable options.[13]

Massachusetts Non-Disclosure Agreement – This document will be presented to employees, independent contractors, and other individuals who will have access to an entity’s trade secrets for the purpose of maintaining the confidentiality of said secrets.

Massachusetts Non-Solicitation Agreement – A legally binding document that prohibits employees from engaging with customers and fellow employees for their own benefit.

Is blue penciling allowed in Massachusetts

Yes. Due to the recently enacted MNAA, courts have the ability to modify non-compete agreements if it would help make the restrictions more reasonable while maintaining proper protection of the employer’s business interests.[14] 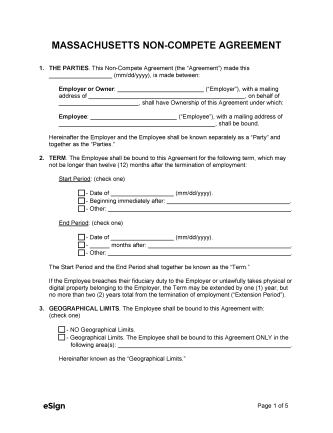 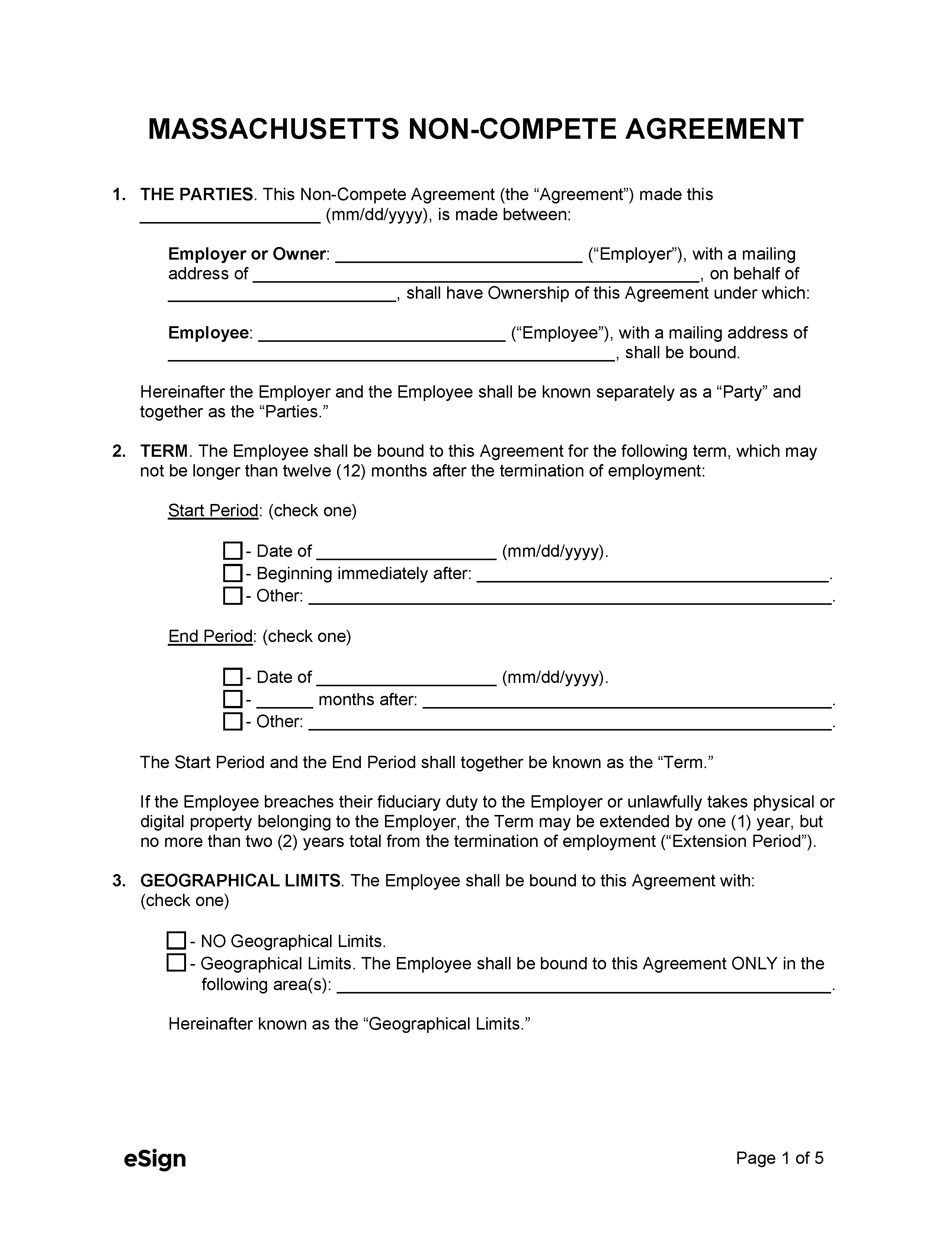