A medical power of attorney form is a form used by adults to elect a representative who will make decisions on their behalf regarding medical matters, should they become incapacitated (unable to communicate). It is completed prior to a medical event and is used for planning purposes only. It can only be completed by those that are of sound mind (mentally competent).

Also known as a:

What is a Medical Power of Attorney?

A medical power of attorney is a document completed by those looking to plan for end-of-life care and/or an unexpected health event. By completing and signing the form, the principal ensures their wishes are represented by someone they know and trust. The document does not specify the types of treatment they would or would not like to receive, as that is reserved for a living will form. Assigning a representative early on gives family members significant relief in that they can avoid having to argue or fight over who should make decisions for the principal should the time come when they are unable to communicate with those around them.

It’s important that the parties understand the form only remains in effect while the principal is still living. Once they pass, a last will and testament (a “will”) is typically used for distributing the principal’s assets to family members.

What Rights Does It Give?

In itself, the document gives the selected agent ALL RIGHTS regarding healthcare decisions. If there are certain topics or decisions the principal would like to prevent the agent from handling, they can specify said restrictions in the document. This contrasts with a limited type of POA, which typically requires the principal to state what permissions the agent does have, with it be assumed that all non-mentioned topics are off-limits.

Agent / Attorney-in-Fact – the person(s) that will represent the principal and make medical decisions on their behalf.

Principal – the person that creates the form.

Incapacitation – being in a state that leaves one unable to manage their own affairs (being in a coma, for example).

How to Get Medical Power of Attorney

At a minimum, the principal has to nominate one (1) person as their agent. This is commonly a loved one or a close friend. The principal is not limited to who they can choose as their agent. So long the one(s) they choose does not work as a healthcare provider where the principal receives treatment (a common state requirement) and they are over the age of eighteen (18), they can most likely serve as the attorney-in-fact. It is highly recommended that the principal nominate two (2) additional agents, known as “successor agents”. Should the primary agent be out of the state or country, pass away, or make poorly serve the principal, a secondary agent can step in as the primary agent.

Without changing the POA, the attorney-in-fact would receive all-encompassing powers from the principal relating to medical matters. In other words, the agent receives the right to make any decision that the principal would be able to make (if they were not incapacitated). This includes choosing the type(s) of care the principal receives, how it’s administered, and any other questions that come up along the way. The principal should complete a living will alongside the POA to ensure the agent understands important matters, such as life support and organ donation.

Once the principal has completed all required fields (as stated in the “How-to“), they will need to sign the form. This MUST be done as required by state law, which will require the form to be:

If witnessed: If the principal will sign in view of witnesses, the witnesses will need to verify the signer’s signature at the same time. Once verified, they will need to sign and print their name(s) onto the form.

If notarized: If the principal will notarize the POA (in addition to, or in replacement of witnesses), they have the option of notarizing the form in-person or digitally. In-person options include local post offices, libraries, and banks (to name a few). Alternatively, the principal can have the form notarized via Notarize.com. All they have to do is upload the form, speak with a licensed notary, sign the form while speaking with them, and pay $25.

The principal should make copies of the completed and signed POA and distribute it to their attorney, primary care physician, and anyone else whom they believe is necessary. However, it’s important to make a note of every single person that receives a copy of the POA, as they will need to be contacted should the POA be revoked later down the line. The agent will need to show a copy of the POA anytime they present themselves as the principal’s agent.

Does a spouse automatically have power of attorney?

Yes, so long there isn’t a POA already in place, and there is no court-assigned guardian.

Does a medical power of attorney override a living will?

When does a medical power of attorney take effect?

What happens if there is no medical power of attorney?

In the event an individual becomes incapacitated without having a power of attorney in place, the person that can speak on their behalf is dependent on state law. With North Carolina as an example, Jesson & Rains, PLLC stated the order of those that would have authority in making decisions for an incapacitated person as:

As mentioned before, each state can set their own rules regarding authority over someone that is incapacitated, so the applicable state laws should be referenced. 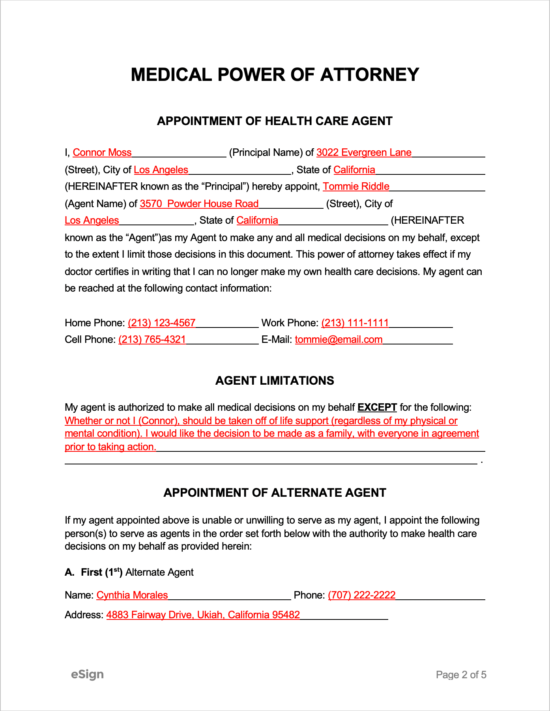 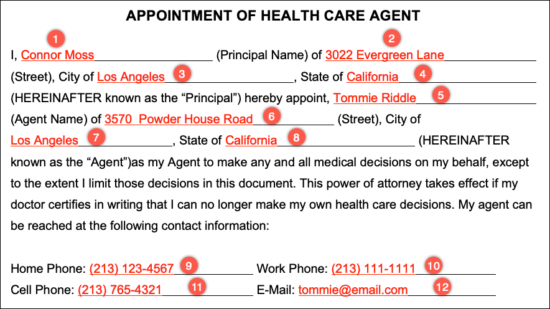 Step 2 – Limitations of the agent

The principal can specify certain actions/topics the agent cannot make decisions regarding. This section is optional, and can be left blank if the principal does not intend to limit what the agent can do. 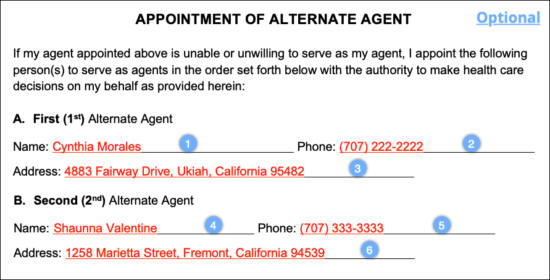 Step 4 – Original and copies of the POA

For the first (1st) section, write the address/location where the original POA will be stored. If it will remain in the principal’s home, the exact location should be specified. For example, if it will be placed in an office, write which room, desk, and drawer it can be found in.

For the second (2nd) section, specify the name(s) of ALL individuals and entities that will be given a copy of the POA. It is very important this is noted, as the principal would need to reach out to everyone that received a copy should the principal intend to revoke the form.

Step 5 – Duration of the agreement

This section is optional. If the principal wants to make the POA automatically terminate on a certain date, they will need to:

If witness(es) viewed the principal’s signature, they will both need to sign their name, write their printed name, the date they signed, and their full address. If it was viewed by a Notary Public, they will know which fields to complete (do NOT write anything in the “Notary Acknowledgment” area). 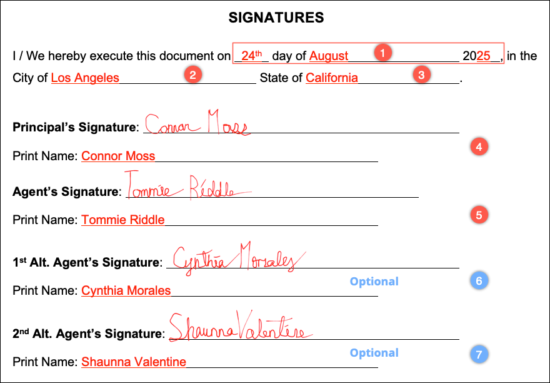 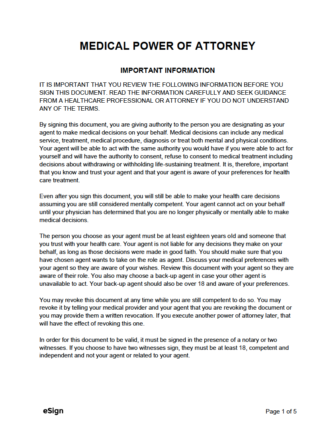